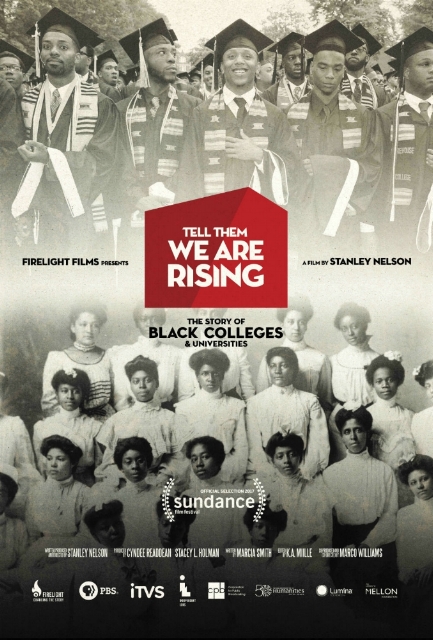 Tell Them We Are Rising, a compelling new film by Stanley Nelson and Marco Williams, details the profound role that Historically Black Colleges and Universities (HBCUs) have played in American history. It airs on PBS’ Independent Lens Television Series Monday, February 19th, and will begin streaming on their website February 20. Don’t miss it!

The film is available on ITVS during February, which is Black History Month. This month, the hallways and classrooms of our kids’ school are covered in words and images of African American leaders, thinkers, authors and activists. It’s a good thing, but it is also illustrative as it shines a spotlight on how very often African American figures are absent throughout the rest of the year. And it begs the question, why isn’t African American history always included as an integral part of understanding American history?

Filmmaker Stanley Nelson says, “If education is a cornerstone of society, then HBCUs are the groundwork for advancing justice in America. Thoroughly examining the history of HBCUs not only allowed me to highlight their importance within black communities, but demonstrate how they were instrumental to the formation of protest movements across the United States.” There’s more about HBCU students’ current leadership in Stanley Nelson’s NYTimes OpDoc “Black Colleges in the Age of Trump.”

We at Blueshift were sincerely honored to partner with Firelight Media to create a discussion guide and classroom lessons for Tell Them We Are Rising. The film foregrounds the role that African Americans have had in the birth and growth of our nation, and the role that HBCUs have played as a cultural touchstone. It is abundantly clear that the history so beautifully portrayed in the film is the history of our entire nation.

One of the strongest themes in the films is how HBCU students have played leading roles in the development of the major social movements in the U.S. The leadership of HBCU students has increased access for all to civil rights, education, healthcare and more, and today,their leadership continues with #BlackLivesMatter and our ongoing conversation about new models of policing.

We can’t get a complete picture of the founding of our nation, our economic growth, our bloodiest war, our legal evolution, and our social movements without studying the role African Americans have played in the birth and growth of this nation. So February is the perfect time to honor African American History, and to redouble our commitment to embracing inclusion in the telling of our American history all year round.

Visit http://www.hbcurising.com/ to catch a screening near you, and tune in to ITVS Monday, February 19th.