“There’s nothing inherently medical about dying. It’s much larger than medicine. It’s purely human. Part of that admission is to keep all of this couched in humanity, not medical science, or social science, but really a full arc of humanity. Kindness, total openness, vulnerability, exchange.”

Many may know of BJ Miller from his TED talk, but we got to know him and many other extraordinary palliative caregivers at UCSF and Zen Hospice Project in San Francisco through End Game which began streaming on Netflix on May 4th.

Originally premiering at Sundance in 2018 in the Documentary Short Program, End Game is directed by acclaimed filmmakers Rob Epstein and Jeffrey Friedman. Through their lens we see, hear, and witness this often intimate, at times beautiful, and always difficult experience of end-of-life decision making through the stories of families and individuals facing serious illness. Our work centers on creating educational content to bring awareness and dispel misconceptions about palliative care for community screenings, for clinicians, and for families. Both UCSF and Zen Hospice are unique settings in how they work and the care they offer, but both show the extraordinary and compassionate work palliative care physicians and caregivers offer. All are guided by the principle to help people live as well as possible for as long as possible while supporting families and loved ones through this most difficult journey. This level of care and compassion is really at the heart of what it means to be a healer.

We also see in End Game that several misconceptions about palliative care often stand in the way of individuals and families accessing what is available. One is that the term “palliative” is unfamiliar to most, and perceived by many as only for those that are dying. Another is that “hospice” is interchangeable with “palliative care” and is also a code word for dying. These ideas are inaccurate. 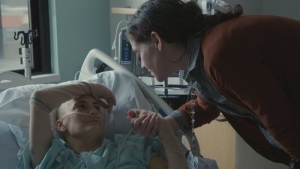 Palliative care physicians want their colleagues and the general public to know of the need for and benefits of palliative care for improving the quality of life for people at any stage of a serious illness. It is not just for people who are dying. It can and should be introduced at the time of a diagnosis and administered throughout the course of an illness. It is both a philosophy of care and an organized, highly structured method and system of delivering care. And, those working in hospice want families and patients to access hospice support and services much earlier than the final weeks of life, which is often the case.

These are just a few of the correctives to be made, and the urgency to both increase the number of palliative care facilities, educational programs, and physicians and caregivers is more urgent than ever. It is projected that the US senior population on average will grow 49.5% by 2030. Twenty-five states will see increases greater than 50%. In other words, one in five Americans will be a senior citizen – twice today’s number. This will be one of the largest populations of senior citizens in our nation’s history, stretching our current healthcare system, particularly in end of life care and treatments, and testing our economy in unprecedented ways. Certainly seniors are not the only people needing palliative and hospice care, but they remain one of the largest population that accesses this level of support on an ongoing basis.

These priorities are only the tip of the iceberg. So many amazing ideas, perspectives, and organizations have generously shared their wisdom and their commitment to raising awareness and knowledge about palliative care and BJ Miller’s words from End Game again stand out. When we can all recognize and truly embrace the common human experience of death and hold its loss and sadness as a purely human experience that we all universally share as humans, then we can begin to get to the core of shifting our cultural acceptance and medical practices around dying.