DOLORES HUERTA, OUR PAST, PRESENT AND FUTURE

“DOLORES IS A DANCER ON THE STAGE OF JUSTICE.”
– ANGELA DAVIS 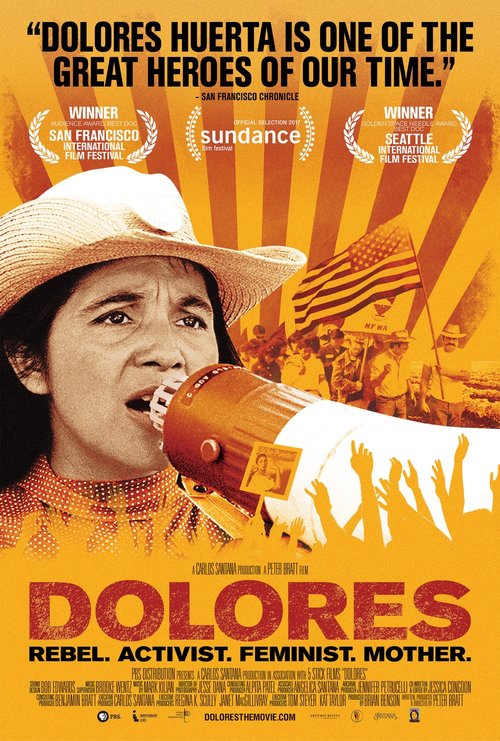 On the one hand, the documentary film Dolores is a historical telling of iconic activist Dolores Huerta’s role in the farm worker, civil rights, Chicano, feminist, environmentalist and LGBTQ movements that shaped the political and cultural landscape of the U.S. in the twentieth century. And, it shines a light on the Dolores Huerta Foundation where she continues to teach community organizing and advocate for equality, civic engagement, public and environmental health, education and economic development.

On the other hand, the struggles and inequalities Dolores works to dismantle in the film feel like they are torn directly from today’s headlines. People are once again holding house meetings, knocking on doors and marching in the streets crying out for racial justice, gun violence prevention, women’s rights, immigration reform, and more.

Filmmaker Peter Bratt created this film to affirm Dolores Huerta’s iconic place in American history for a new generation. In an interview with Blueshift he said he wants the film to send these two key messages:

1) Dolores Huerta, a Latina woman, is a civil rights champion who deserves to be taught and studied because her work increased rights and improved the lives of every American. Racism and sexism have prevented Dolores Huerta from becoming the inspirational household name she deserves to be. Even President Barack Obama wrongly attributed his hopeful “Yes, we can” rallying cry to Dolores’ partner Cesar Chavez, when it was Dolores herself who led the first chants of, “Sí, se puede!”

2) The rights that so many different communities continue to fight for are deeply interconnected. Dolores’ example demonstrates the power and possibility that comes from recognizing the intersectionality of movements, and working in partnership to make change.

Dolores sends those messages and more. Her relentless, unflappable belief that a marginalized and oppressed population could ignite the national consciousness and create real change inspired thousands of people to get involved and make it happen. As we turn our eyes to our own national stage in this moment, the impossible odds the farm workers overcame is proof that change is possible. The challenges we face now, from climate change to racial inequality, are not new. But, every single one of us has the power to change them. As Dolores says, “The power is in your body.”

It was a deep honor and a true inspiration to work with ITVS, PBS Learning Media and the Dolores Huerta Foundation to create a Discussion Guide and classroom lessons (available soon) in English and Spanish to accompany this incredible film.

Don’t miss the broadcast Tuesday, March 27th on ITVS at 9pm, and the film will stream on ITVS for a few weeks after.