It feels urgent to be creating high school and higher education curriculum for the Amazon Studios film The Report, premiering on November 19th. As our nation is currently undertaking multiple investigations involving the Executive Branch, this film offers a telling account of the need and purpose for Congressional oversight and accountability and how these systems have functioned in the past.

This work is a bit of a departure for us because it is not documentary, but a fictionalized version of actual events that took place in the aftermath of the terrorist attacks against the United States on September 11, 2001. Directed by Scott Z. Burns, the story traces Senate staff member Daniel J. Jones (Adam Driver) as he is tasked by Senator Dianne Feinstein (Annette Bening) to lead an investigation of the CIA’s Detention and Interrogation Program.

Jones’ relentless pursuit of the truth leads to explosive findings that uncover the lengths to which the CIA destroyed evidence, subverted the law, and obscured the truth from the American public.

As Senator Dianne Feinstein, Chairman Senate Select Committee on Intelligence (2001 – 2009) says in the Foreword to the published Executive Summary of The Senate Intelligence Committee Report on Torture, “It is precisely at these times of national crisis that our government must be guided by the lessons of our history and subject decisions to internal and external review.”

Check back later this year for more information about the film and the educational materials we are creating for Amazon Studios. 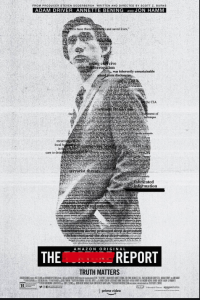